JESSE MILNES & ​EMILY MILLER
Photo credit: Stephen Schauer
Jesse Milnes and Emily Miller perform country and old-time music, singing close harmony with Jesse's unique finger-picked guitar style and a healthy dose of old-time fiddling.  Emily was raised playing and singing old-time and country music (the Louvin Brothers and the Stanley Brothers were household favorites) with her parents while they traveled the world as journalists. Jesse grew up in the world of West Virginia old-time music, learning from masters like Melvin Wine and Ernie Carpenter as well as his father, Gerry Milnes.  They now make their home in central West Virginia.

In addition to their duo performing, Emily tours extensively with The Sweetback Sisters (a 6-piece country band fronted by Emily and her pseudo-sister Zara Bode), they both play for square dances around West Virginia, and also frequently teach harmony singing with Emily's mother Val Mindel.

As of June 2019, Emily is the Artistic Director of the Augusta Heritage Center of Davis & Elkins College.

WHAT THEY ARE SAYING ABOUT JESSE & EMILY:

"One of the essential traditional albums of the year" -- No Depression

"Emily’s vocals are pure, rich and filled with sincerity...The dual fiddles of Jesse and Emily on “Woody’s Waltz,” made me recall the fine fiddle playing of the late John Hartford who would have loved every track on this entire collection." -- No Depression

"On this recording one can hear two absolute masters who have great respect for tradition, but bring a new vibrancy of life to every note they play and sing" -- Folk Radio UK

"Milnes and Miller weave [a] sonic spell" -- Pittsburgh in Tune

"A pure-drop distillation of West Virginia’s true mountain heart...This record is most certainly one of the top old-time releases of 2015" -- Fiddle Freak 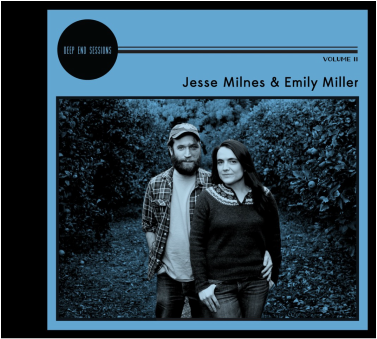